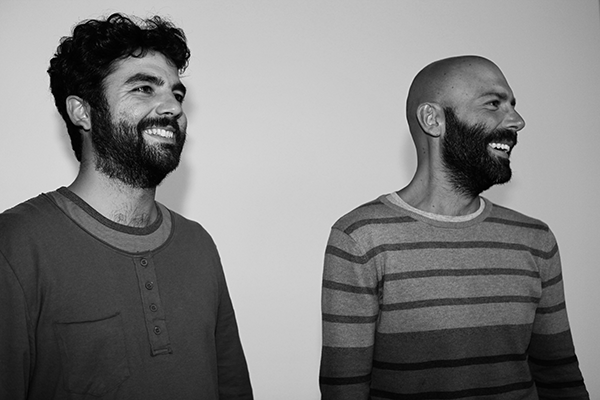 Marco Trulli and Claudio Zecchi are working since 2006 as a curatorial collective into a public art project called Cantieri d’Arte, a platform for active research in the field of art in public spaces, with the aim to develop participatory projects planned to experiment with forms of involvement and reactivation of consciousness able to investigate the dynamics of the relationship between art and city using contemporary art as an investigative tool.
While the first editions of the project aspired to investigate the imaginative structure of the city, re-reading the urban fabric through the production of site-specific projects, today Cantieri d’Arte, turns to a dimension of reflection on the themes of artistic practices in the city through the construction of temporary spaces and discursive practices directly into the public space.
In this sense, art becomes a tool of analysis that puts the formal aspect, which belongs to its own grammar, and the content on the same floor in a function of lexical re-appropriation that aimed to develop «innovative representations that elude political interpretation»

Marco Trulli
He graduated from the Faculty of Conservation and Cultural Heritage of the Tuscia University in Viterbo with a bachelor’s degree in History of Contemporary Art. In 2007 he attended the specialization course “Conceptual buildings and architectures: ways of representing the imaginary city and the real city. Since 2005 he has supervised the public art project Cantieri d’Arte in collaboration with the Tuscia University hosting a number of national and international artists who have created site specific projects and installations for the urban space. In 2007 the project has been presented in the conference La città dei biSogni (The City of Needs) at the MAXXI Museum in Rome where also many artists and collective groups that work in the field of art and territory were participating. Since 2009 he is the president of Arci Viterbo where he carries on cultural projects. Currently he coordinates public art projects at National Arci. He supervises the Cantieri d’Arte editorial projects for Gangemi publishing (La città dei biSogni, Visioni Urbane Contemporanee, Drawing a new memory) and takes part with workshops in the Biennial of young artists from Europe and the Mediterranean of Skopje (Public Invasion) Thessaloniki and Rome (La Forma and Game Overflow). He has edited publications on the connection between art and nature, specifically on the contemporary sculpture garden La Serpara by Paul Wiedmer and collaborating with the Tinguely Museum of Basilea at the volume Feuer und eisen (Kehrer verlag). He is the official representative of Arci Lazio at the Biennale de la Mediterranée.
He lives and works in Viterbo.

Claudio Zecchi
He graduated in 2003 from the Faculty of Conservation and Cultural Heritage of the Tuscia University in Viterbo with a bachelor’s degree in History of Contemporary Art. In 2004-2005 he earned a Master Degree from the Faculty of Architecture of Valle Giulia in collaboration with the Macro Museum in Rome in “Management for curators of Museums of Contemporary Art and Architecture”. After an internship at the GAMeC exhibition office (Gallery of Modern and Contemporary Art) in Bergamo for the exhibition “War is Over, 1945-2005 from Picasso to Warhol and Cattelan”, he returned to Rome where he started a series of collaborations with private galleries.Currently he works with the De Crescenzo & Viesti Gallery of Rome where he assists curators and publishing. For De Crescenzo & Viesti Gallery he has collaborated at the curatorship of (selection) “Insolito”, by Thorsten Kirchhoff, February 2010; “SimSim Salabim” by H.H. Lim, April 2009; “…non finirà mai…”, by Felice Levini, February 2009; “Passages” by Chiara Dynys, May 2008. Since 2006 he deals with public art projects organizing and managing the festival Cantieri d’Arte which occurs annually in Viterbo. For Cantieri d’Arte he has edited: “Game Overflow”, December 2011, collateral event of BJCEM – Symbiosis?, MACRO Museum, Rome; publishing Workshop “La Forma”, October 2011, collateral event of BJCEM – Symbiosis? (Salonicco); “La  forma della città” September-October 2011 (Viterbo); Curator and publishing coordinator of the catalogue “Drawing a new memory” September-December 2010; “Visioni Urbane Contemporanee”, October 2008-april 2009, (Viterbo); “La città dei biSogni”, June 2007-january 2008 (Viterbo); “Ridisegnare i Luoghi Comuni”, September 2006, (Viterbo). Ultimately he has collaborated with a number of editorial productions and he has published various texts among which BUTOBA MT5_registrare il rimosso in “Arte e memoria dell’arte”, extracts of the conference at Tuscia University (Viterbo), July 2009.
He lives in Sabaudia (LT) and works between Rome and Viterbo.