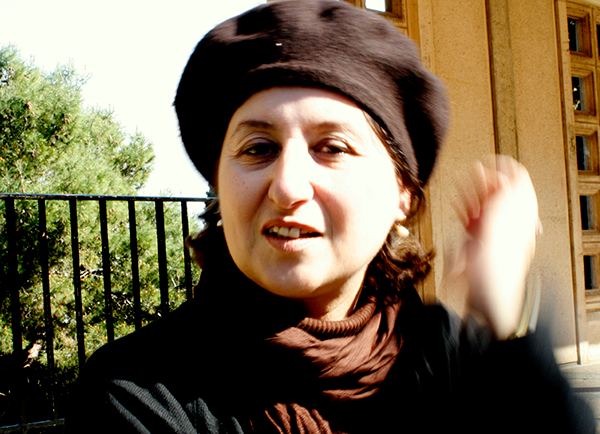 Nadira Aklouche-Laggoune is curator and art critic. Graduated in Law and  Masters degree in audiovisual and critical theory of art,  doctoral student in art, she is currently a lecturer at the Ecole Supérieure des Beaux Arts in Algiers where she teaches History of Contemporary Image, Aesthetics and leading a seminar on Contemporary Art since 1986 to date.
She had successively provided the charge of Head of Department of Plastic Arts (1996/2003) and  Director of Studies (2003/2005) in the Ecole Supérieure des Beaux-Arts d’Alger.
She has taught in parallel the mastery of  critic and aesthetics at the Higher Institute of Dramatic Art and the Higher Institute of Music in Algiers from 1995 to 2000. She has been on numerous juries of plastics arts in Algeria and abroad including the Grands Prizes for Painting in the city of Algiers, the Arab Fund for Culture (AFAC), the Algerian Film Panorama. Today she is member of the Fund for Assistance to the Algerian Cinematographic Production, International Association of Art Critics, Scientific committee of the exhibition for the new museum MUCEM Marseille 2013.
She has written extensively on contemporary art in general and especially on the current Algerian art, its development and gender issues in art. Among her collaborations and interventions, the journal Canvas (London / Dubai) in 2007, the magazine Rue Descartes (Collège International de Philosophie, Paris) in 2007, the Journal Naqd (Critical review of social sciences, Algiers) 2001, The Mind of South (Marseille ) 2001, CEDAC (Murcia, Spain) 2010, “Modern and Contemporary France” Manchester University (2010), Meeting Point, Sternesen Museum, Oslo 2005, “Contemporary art in the Middle East and North Africa, MoMA symposium , New York 2005, “Art Event” Sthlm, Sthlm, Sthlm!, Stockholm, October 2010, “The intriguing Biennial  of Sharjah” Sharjah in April 2011, “Art and memory in the Maghreb” Diderot University of Paris X in October 2011, 45th AICA congress “ Writing with an accent” july 2012 Zurich, and other writings about prominent artists as  Zineb Sedira, Ammar Bouras and others.
Among her works, “Algiers in painting, from 1830 to today” 120 p,  Ed Rsm Com, Algiers 2000, “Issiakhem, the forgotten face of the artist” 152 p, Ed Diwan Algiers 2007.
She is the curator of many international and local exhibitions, including some of the largest “African” and “Contemporary African Art” in the second PANAF Algiers in 2009, “Emissaries” (Algeria Year in France 2003), ” Art Women “(2007, Algiers, Capital of Arab Culture), the 1st International Festival of Contemporary Art in Algiers (FIAC 2009,  in Museum of Modern and Contemporary Art in Algiers,  MAMA), the third International Festival Contemporary Art in Algiers (FIAC 2011)  in MAMA, Dak’Art 2012, the 10th Biennale of Dakar.
Nadira Laggoune-Aklouche lives and works in Algiers, where she works to give visibility to new generations emerging in the field of contemporary art in Algeria and the African continent.