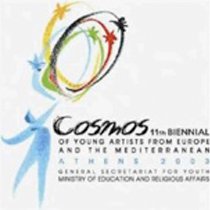 Athens hosted the XI edition of the Biennial of Young Artists from Europe and the Mediterranean. In the same period Greece held the Presidency of the European Union, amidst the Cultural Olympiad 2001-04, in honour of the incoming Athens Olympic Games of 2004.

Therefore, the XI Biennial constituted an exceptional forum for cultural exchange, in parallel to the Olympic Ideal promoted by the hosting city of Athens around the world.

According to this ideal, the chosen theme of the edition was Cosmos, enhancing Athens as a place where different civilizations come and meet, to produce an harmonic, integral and peaceful environment.

Theme: COSMOS – A sea of Art

For this Biennial the artists were invited to present their own perception of Cosmos.

The artists started to question themselves about the feasibility to depict and represent the complexity of the contemporary world, opposed to the feeling that one can only speak for himself, for his own subjective microcosm.

This dilemma made room for modern youth creativity, having produced innovative artworks and interpretations where cosmographies and the digi-cosmos harmonically met with cosmopolitanism and globalization through the imaginary world of young creators.

All events were held in Antonis Tritsis Park of Environmental Awareness at Ilion, in the western part of Athens. The aim behind the choice of the organizers was the upgrading of a neglected area, which was cut off from cultural activities.

Thanks to the Biennial and the Olympic Games this area has been upgraded and grown becoming the place where the artists could exchange views and experiences.

General Secretariat for the Olympic Games – Hellenic Ministry of Culture

Association for the Development of West Athens National Youth Foundation

Coordinator of Workshop, Meetings and Symposiums

Curator and Designer of Exhibition