Bjcem General Assembly and Board of Directors in Turin 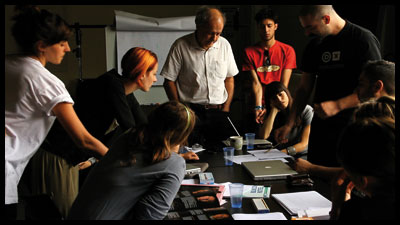 Arrivi e partenze is an exhibition promoted by the Culture Department of the City of Ancona with the support of the Youth Ministry and Marche Region, dedicated to young artists under 35 years-old.

After two editions dedicated respectively to Italy and Europe, the project reached the 3rd edition, which is entirely dedicated to the Mediterranean and will focus on artistic works that generate questions on the “geography of the encounter”.

The exhibition will be opened on June 15th and the opening ceremony will be the occasion to present and launch the next edition of the Biennale de la Méditerranée, which will be held in Ancora in 2013.

Curator of the exhibition will be Elettra Stamboulis.

Works of the following artists of Bjcem network will be exhibited:

Barbara Gurrieri Group, from Italy. Selected by ARCI Sicily for the Skopje Biennial (2009)

Dor Guez, from Israel. Selected by the Israeli Center for Digital Art for the Skopje Biennial (2009)

Mito Gegic Slovenia, from Slovenia. Selected by SKUC for the Thessaloniki-Rome Biennial (2011)

Yael Plat, from Israel. Selected by the City of Turin for the Skopje Biennial (2009)

Younes Baba Ali, from Morocco. Selected by JAA – Jeunes Artistes Africains for the Skopje Biennial (2009) and by Espace Culture Marseille for the Thessaloniki-Rome Biennial (2011)