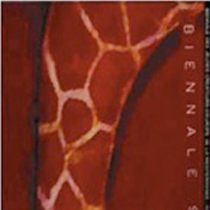 The V edition of the Biennial was held in Marseille and was organized in a moment where the political situation in the town was beginning to be more and more oriented towards the development of cultural activities. The impact of these initiatives is still being felt and the Biennial project had become an integral part of this process.

For this edition the organizers decided to stress the connections between creation and market, inviting many gallery-owners, as well as directors of show halls and festivals. For that reason, for the first time in the history of the Biennial, professional curator took over the management of the show and exhibitions.

The desire for a certain professionalism was not the only aspect that Marseille brought to the event: in fact, for the first time, the Biennial opened its doors to the towns of Northern Africa, showing works of artists from Algeria and Tunisia.

Concerning the disciplines, there weren’t changes from the previous edition in Bologna, except for the opening up to a new discipline: the culinary arts.

The Vieille Charité hosted the bulk of the exhibitions. The Centre International de Recherche sur le Verre hosted the Design Exhibition. The major theatres, such as the Théâtre National de la Criée and the Théâtre du Gymnase hosted perfromances of contemporary music, dance and theatre.

Office of Cultural Affairs of Marseilles

Management of the Biennial

The Biennial was organized under the patronage of François Mitterrand, President of the Republic.