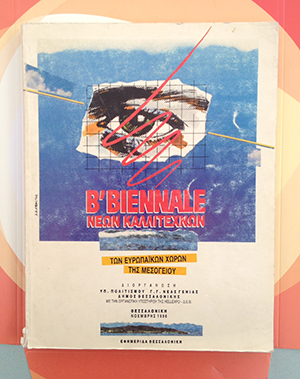 The II edition of the Biennale of Young Artists from Europe and the Mediterranean was held in Thessaloniki in 1986. In those years the city experienced a significant cultural development and the young citizens carried on a vital need to open up to the world. We asked Ms. Afrodite Oikonomidou, curator and cultural event producer, to answer some questions about the Biennale that she lived in first person in 1986, being directly involved in the organisation of the event.

Afrodite, what are your best memories about the Biennale in Thessaloniki?

According to me the 1986 Biennale has been a historical event for the city of Thessaloniki! Considering that Thessaloniki has always been a crossroads of cultures and an important artistic centre troughout the centuries, yet this event has given to the cultural life of the city an added value and new perspectives for the organization of events and the involvement of the public. There has been an unexpected explosion of vitality, the whole city embraced this unknown festival dedicated to young people, all cultural institutions contributed and supported the event with enthousiasm and finally the participation of the public has been really massive. There was great curiosity for a new kind of artistic meeting, for the many different disciplines presented together and the numerous countries participating, for the innovation brought by the young creatives. for the new spaces opened and used in unconventional ways. Presenting young emerging artists has been an authentical challenge, a new vision that people really appreciated and followed with passion.

The choice at the time was the “discovery” and “rebirth” of new venues: forgotten and abandoned buildings, unknown monuments, inaccessible warehouses. Was it possible to keep some of those locations opened to the public in the following years? What has been the legacy of the Biennial?

This is true, the Biennale of the Mediterranean offered Thessalonki a great chance to revalue splendid spaces that had fallen dismissed, to upgrade them and give them new life through alternative uses. During the Biennale we have opened for the first time the old warehouses in the port that hosted the music concerts. We restructured and re-used, after more than 20 years of abbandon, the wonderful Royal Theatre on the sea front, where theatre performances took place. We took the risk to use for the photo exhibitions the Rotonda building, one of the most important Roman monuments in the city centre. The Rotonda, a splendid example of roman architecture with marvelous mosaics, had been heavily damaged during the 1978 earthquake and it was opened to the public with the occasion of the Biennale. Also the White Tower, the symbol of the city has been used for the fashion exhibition, with a very bold and unusual set-up. Many other places came up with a new light and a new concept of cultural use in that period. But the most important of all is the fact that the Biennial gave the hint for this rebirth that fortunately did not stop after the end of the event. The city continued discovering, developing and valorizing its venues and now these places are used as Museums, cultural centres and temporary exhibition spaces. It has been a very hard work, but the result was really worth it. And this is the legacy of the Biennial.

The disciplines were: Photography, Video, Dance, Visual Arts, Architecture, Industrial Design, Comics and illustration, Jewellery-making, Music, Cinema and video,  Literature. Which was the artist and/or the performance that impressed you the most? And why?

My favourite set-up was the one of Fashion at the White Tower, because it was something absolutely new, crazy and unconventional and the one of Photography at the Rotonda because it managed to combine in a surprising way the ancient charm of the building with the modern photographic images. The place I preferred in the evening was the Royal Theatre where the performances followed one another until late, full of inventions and new means of expression.

You attended also the XV Biennale in 2011. For the first time it involved 2 cities: Thessaloniki and Rome, each of them focusing on particular disciplines (Cinema, Literature and Music in Rome; Visual Arts, Applied Arts and Gastronomy in Thessaloniki). What were the main differences that you noticed among the two Biennali in the city? How reacted Thessaloniki, 25 years after the first Biennale?

The second Biennale in 2011 had also a great success in the city but of course it was not that great event like in 1986. It was very well organized, some new spaces were also presented for the first time to the public and the participation was big. Also, I think that a very important element was that it gave to people the opportunity to discover and appreciate new disciplines like applied arts and especially gastronomy that were not considered part of the artistic world.

I think that the biggest value of the Biennial of the Mediterranean as an event, was its social component. The Biennale was not conceived as a simple exhibition of art works or a programme of performances and concerts, but mostly as a friendly field where young artists can meet each other, contact other artists, discuss, exhange ideas, put together new projects.