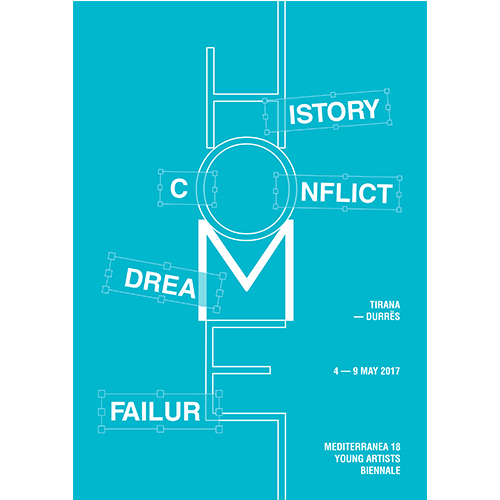 For the very first time, Albania hosted the Biennale of young artists from Europe and the Mediterranean, a multidisciplinary event, promoted by BJCEM, that takes place once in two years in a different location in Europe, with young artists aged from 18 to 34 presenting their contemporary works and performances based on the general theme proposed by the Artistic Director.

The Ministry of Culture of Albania, in collaboration with BJCEM, hosted 230 artists from Europe and the Mediterranean region. The public enjoyed a different experience of contemporary art thanks to the interesting formula of Mediterranea 18 Young Artists Biennale, the proposed theme and unusual exhibition spaces in Albania.

The Ministry of Culture of Albania, together with BJCEM’s Board approved the appointment of Driant Zeneli as the Artistic Director of Mediterranea 18 Young Artists Biennale, with the responsibility for conceptualizing the theme of the Biennale and setting up the curatorial team, each of the curators curating one of the following six disciplines: applied arts, visual art, performance, literary creation, music and film.

Driant Zeneli is a renowned Albanian artist working between Milan and Tirana, who represented Albania at the 54th International Art Exhibition-Venice Biennale.

Driant Zeneli conceptualized the theme of Mediterranea 18, having considered the following:

The theme is History + Conflict + Dream + Failure = HOME, and much more than a simple equation, Zeneli’s curatorial concept describes why HOME is grounded on these four elements:

‘’… History, intending the archive of the unaccountable number of individual stories, recorded or forgotten. Conflict, to consider the way we share homes. Dream as the project of home, as the fundamental human right to be free to choose and desire our real or imaginary home. Failure as the inner resistance of the various attempts, transformed along the way in search for the dream home’’.

The Curatorial Team comes from various countries and backgrounds, and bring with them valuable experience for curating their respective discipline:

The 230 selected artists exhibited in some unusual and though-provoking spaces around Tirana and Durrës. The exhibition spaces included former communist sights, museums, buildings, installations, etc. The selected artists were hosted in Tirana and Durres from May 4 to 9, 2017. In those days they had the opportunity to show their works and performed in the spaces provided in the two cities. The exhibitions were opened to the public until May 28, 2017.

Mediterranea 18 was preceded by a pre-Biennial event in Bari, on 3 May 2018. Over 120 artists and 40 international guests were welcomed by the city of Bari and Puglia Region to see the show “Katër i Radës. Il Naufragio” produced by La Biennale Musica di Venezia and Cantieri Teatrali Koreja, directed by Salvatore Tramacere, music by Admir Shkurtaj and libretto by Alessandro Leogrande. All the artists and guests then boarded a ferry that took them from Bari to Durres. A highly symbolic crossing, animated throughout the night by performative conversations on the theme of the Biennale, with the participation of prestigious international guests. The evening debate was held around the work designed by Michelangelo Pistoletto and Juan Sandoval, “Mediterranean Sea – Chairs Love Difference“, composed of sixty chairs that together trace the design of the Mediterranean.