Festival IN, Innovation and Creativity in Lisbon

Mediterranea 17 | SELECTION CLOSED AND LAUNCH OF THE OFFICIAL WEBSITE 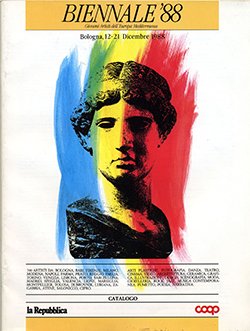 The fourth Biennale was held in Bologna in 1988. For the first time, the “Biennale des jeunes créateurs de l’Europe et de la Méditerranée” happened in Italy, with the participation of more than 700 artists from 7 countries.

We interviewed Mauro Felicori, the Director of the Biennale.

After the editions in Barcelona (1985) and Thessaloniki (1986), for the first time the Biennale happened in Italy.  What are your best memories about the Biennial in Bologna?

Those were years when it was difficult for young artists to get access to the art establishment. Our aim was to connotate the ninth centenary of the Alma Mater Studiorum with an event that largely involved young people and students. And we definetely succeeded: the night parties in Sala Borsa, in which the artists were grouped by nations, never ended before 5 am. For us, who used to start working at 9 am those were really intensive days! 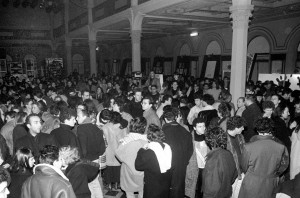 The Biennale spread its activities and performances throughout the city in various locations (Santa Lucia, Sala 300,Teatro Testoni, Sala Bossi, Club Universitario, Teatro San Leonardo, Teatro Soffitta and many more), with an active involvement of the University. What was the impact on the city of such a huge event?

The choice of Santa Lucia for poetry sessions came out from a  provocation by Roberto Roversi. We asked him to coordinate the poetry section and he had agreed on one condition, that the often neglected discipline would got the most important place in the city, the Aula Magna of the University, recently renovated.  We accepted the challenge with some worries, because the place has around one thousand seats!

But the “terrible old man” was right and Santa Lucia was always crowded! I am very proud of the fact that we gave to the artists the best spaces, starting from the theaters, but also the best equipments, and technical instruments. We had only disappointed the Greek composer, who asked for a number of  Steinway gran piano (we later found out that the one provided was only a scenic object); we did not have a proper Jazz Club, so we created one inside the King Enzo palace, with a structure that looked like a sound art installation!

The university was deeply involved. For instance some dozen teachers, including Umberto Eco, in that week had devoted a lesson of their course to the theme of creativity. The program was called “The Biennale in cattedra”.

Which was the artist and/or the performance that impressed you the most? And why?

Unfortunately I had a lot work to do during those days, the organisation was complex and I missed a lot of stuff. However, I would say the Miladoika from Ljubljana, Magali Souriau from Marseille (who inaugurated the 1990 Biennale with our best jazz musicians, Atti, Odorici etc.), and obviously Madredeus, that wrote a song about Bologna. Even the Bolognese artists of plastic arts were and still are very strong. 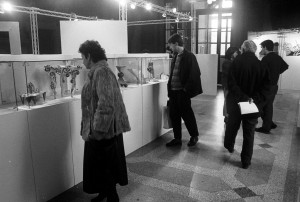 As recently reported in an article published by the web magazine “Fumettologica”, the Biennale has always looked with great interest to the world of comics and the Bologna edition was particularly vital on this side. Can you tell us something about it?

Bologna has been the capital of comics. It has been the focal city for authors like Pazienza, Ghermandi, Ricci, Igort, Giardino, Bonvi, Magnus, Gabos and for a publisher like Luigi Bernardi, who died recently, an animator and a critical visionary who influenced Italy. We published the artists of the 88th Biennial on the Dolce Vita magazine, the pdf can be found in the section of the Bjcem website, where we are uploading the best memories of that season:

It has been almost thirty years since the Biennale and the city of Bologna has been crossed by profound changes, while remaining a cultural center of the first order in the national and international context, with cutting-edge cultural policies. Which perspectives do you see for the future of the Biennale? It is time to think about a new edition in the city?

The real issue, raised by the Biennale in the ’80s, and that concerns other Italian medium-sized cities, at least those that have the ambitions of becoming global and complete: to make a city of culture is it enough to cultivate the citizens’ cultural consumption? We think that it is instead essential to promote the artistic production, and the creativity. The “supermarkets of culture” are not enough, we need the manufactures of creativity. The notion of “Creative City” was born then, and we can be proud of it, despite the fact that this is an ongoing battle.

For the future of the Biennale, we need a stronger connection with the contemporary theme of the creative industries. And even in this field our movement was a pioneer, with the space we offered to the Applied Arts. We did not have to wait for Masterchef to understand thatgastronomy was becoming the core of culture. Nevertheless, today that I am working in the creative industries sector, I feel that the Biennale is not fully embracing its primitive intuition. But it is not a criticism, it is just the suggestion of a true friend!

During the Biennale 88 we hosted the first Arab film festival, an event that was abandoned few years later. Seen through the eyes of today: what a pity!

Mauro Felicori is the director of the Economic Development and City Promotion Department of the City of Bologna.
In 1988 he was director of the Biennale. From 1993 to 1999 as Head of Cabinet of the Mayor, has successfully promoted the candidacy of Bologna as European City of Culture 2000 and the program for the 2000 Jubilee. From 2000 to April 2007 he coordinated a project to promote the Certosa of Bologna and founded the ASCE, Association of Significant Cemeteries in Europe.