From Mediterranea 16: a video selection from the Biennial presented in Padua 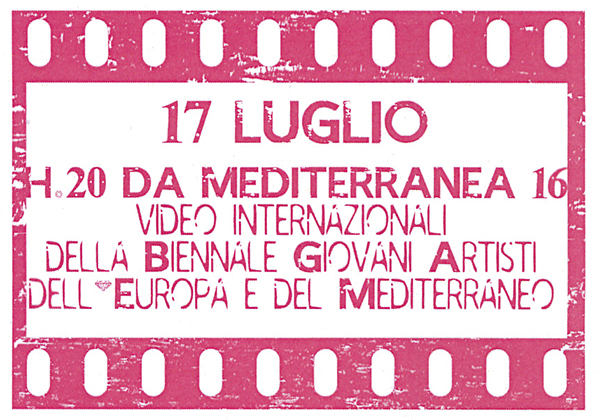 Carichi Movie is a cultural project about movie and video-art: a series of workshops with video artists and filmmakers, to increase the knowledge of the film creation of some author (Silvano Agosti, Andrea Segre…) and give visibility to emerging video experiences of young video makers. Every evening after the workshop there will be a cocktail with the artists and the movie projection.

As part of this program, the evening of July 17th will be dedicated to a special project, From Mediterranea 16, which will present a selection of videos from the Mediterranea 16 Biennial.

Carichi Movie is a project organized by Carichi Sospesi and Gooliver Associazione Culturale
In cooperation with the Municipality of Padua
Curated by Raffaele Pizzatti Sertorelli.

The association Carichi Sospesi (Loads Suspended) is involved from years on the production and promotion of performing arts, organizing workshops and events dedicated to theatre, performances, music and cultural activities in the territory. Since 2005 Carichi Sospesi organizes every summer a festival for theatre and performance arts. This year, for the first time, Carichi Sospesi decided to organize also a cultural event about movie called Carichi Movie.