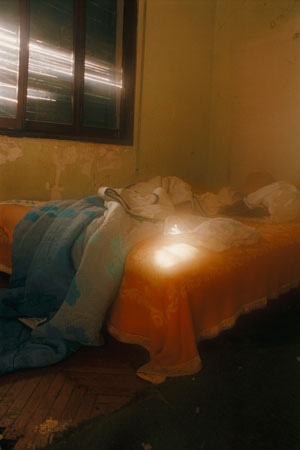 The photographer Martina Dinato, presented by Area Creatività – Progetto Giovani – Comune di Padova, is the third artist who participates to the Gattinara Arte Project.
In Gattinara she’s going to present the works of four different series, realized between 2006 and 2007.
Le porte Regali is a journey trough abandoned spaces and moments of life, filtered by memories. Those memories are the union of the love and the pain caused by a past event still present in our perception. Like Doors and windows, which are the gateway for the memories, the images lead us to the reduced space of light and its absence.
Volti di Periferia is a reflection on the difference between urban space and periphery, which nowadays is not that clear, becoming a chaotic and dilated reality. In this context the artist is attracted by marginal and abandoned objects, which are invisible spectators of the world, who ignore their existence.
Riflessione Contemporanea reflects on the relationship between man and space, starting from the awareness of the loss and confusion of the postmodern. The reality is mutant and nomadic, filled with meaningless voids and reflects the constant humanity state of waiting and loss. That’s way in those images there’s no human being, just empty spaces.
Reperti Urbani is finally another reflection on the modern society, the loss of identity, the more and more reduced difference between urban spaces and suburbs and the transformation of the everyday landscape.

Born in 1978 in Padua, Martina Dinato graduated in 2005 in graphic design and after that she achieved a post-graduate title in photography. Now she works as a freelance photographer.
She took part in many collective exhibitions and in 2009 realized Realtà incerta, her first personal exhibition at the Galleria Civica of Modena. In 2011 one of her works is published on “Fotocrazia”, a blog curated by Michele Smargiassi, published on the on-line edition of La Repubblica newspaper.