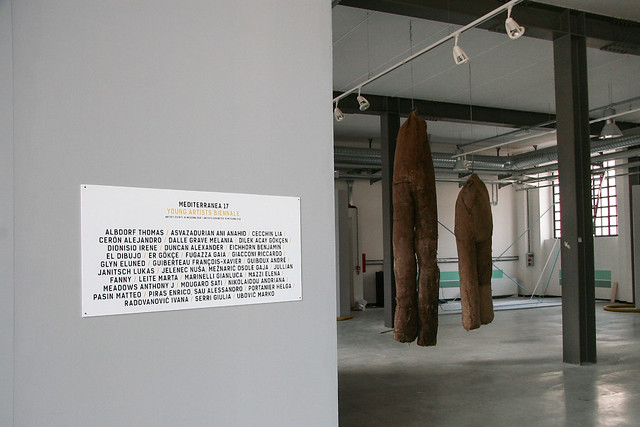 From October 22nd to November 22nd 2015, the “Fabbrica del Vapore” (Via Procaccini 4) hosted MEDITERRANEA 17 YOUNG ARTISTS BIENNALE, a multidisciplinary international event, curated by Andrea Bruciati, promoted by BJCEM and the Municipality of Milan, in collaboration with Arci and the Patronage of Fondazione Cariplo. The exhibition was included in the “Expo in città” calendar, a programme of initiatives that animated the cultural life of Milan during the semester of the Universal Exhibition.

In one of the most representative place for contemporary creativity, 300 creative talents under 35, coming from all the Mediterranean area, have presented their artworks, following the main theme of this edition of the Mediterranean Biennale: No Food’s Land.

Andrea Bruciati (Corinaldo, 1968), received his degree in Contemporary Art History after writing his thesis on Lucio Fontana and Piero Manzoni. From 2002 to 2011, he has been director of the Galleria Comunale d’Arte Contemporanea (GC. AC) of Monfalcone, and from 2012 he manages as artistic director ArtVerona Fair in Verona. He contributes to several specialist magazines and plays an active role in the debate regarding a national network for research and training in the field of contemporary art. He is also interested in this regard in the international promotion of the younger generation of Italian artists who work on the peninsula, with the establishment of the MOROSO Prize for Contemporary Art and the dissemination of new media.
His work for the museum and fair includes designing the program formats: lab. it, videoREPORT, prima visione, 40, L’immagine sottile, Fruz, Past Forward, On Stage, Message in a Bottle; So Fresh!, studiovisit. it, Painting Practices, Level 0, raw zone, Artes, Focus XX, Collectors, Meravigliosamente and atupertu.
Among the exhibitions he has organised are: Ouverture: Art from Italy (2002); Painting Codes (2006); Arrivals and Departures_ Europe: a new generation of artists (2010); 00 ITALIA: 100 masterpieces for a hypothesis of History (2012); Yellowing of the Lunar Consciousness (2013); visions for an inventory (2014) and The Rooms of Aragon (2015).

If the contemporary artist is omnivorous by definition, the voracity with which the cultural materials are collected, elaborated and recombined, refers to a comparison between this kind of practice and a contemporary version of the “science of the Concrete”, by anthropologist Claude Lévi-Strauss. It is an ephemeral boarder between science and “mythical thought”, considering this last one similar to an handicraft activity that generates a new cultural artefact, combining meanings and concrete signs, flashing within the intuitive cultural field of the author. An open system that is not self-significant but that, in its incompleteness, grow beyond himself, breaking its own limits, approaching to the assimilation of data, which is the 2.0 era, where nothing exists outside the omnivorous, all-consuming, database. This raises a crucial reflection: in this perspective, is the artist a creator of a critical construction or is he conformed to the information mainstream, turning himself into a lyophilised product ready to be consumed?
In addition to this different meaning, the artistic practice, which is a temporal and a transformation process, can be considered similar to the corporal assimilation of food, that turns into nutriment. The artist passes from the abstract idea to its real and concrete realisation, thus provoking a change of energetic grade, where even the dross becomes an important data as the product of this metaphorical digestion.
The substance transformation is much more important than a finished and static object, therefore forms of art in the making, even potential, contingent, opened to reconfiguration according to an almost organic orientation, are desirable. A sort of “Theory of heat”, quoting Joseph Beuys, that explicit the gateway from raw energy to a significant form, a process that has its roots in the combustion, assimilation, process like alchemy, in a constant balance of powers in dialectical tension. The structural connotations of the artwork are therefore based on metamorphic instances, where the preminent processes are chemical reactions, fermentations, color changes, decomposition, drying of the material, for an image conformation that is permanently unstable.